WAKE-UP CALL: HEALTH AND STATUS OF A WOMAN IN THE FAMILY IN TURKMENISTAN 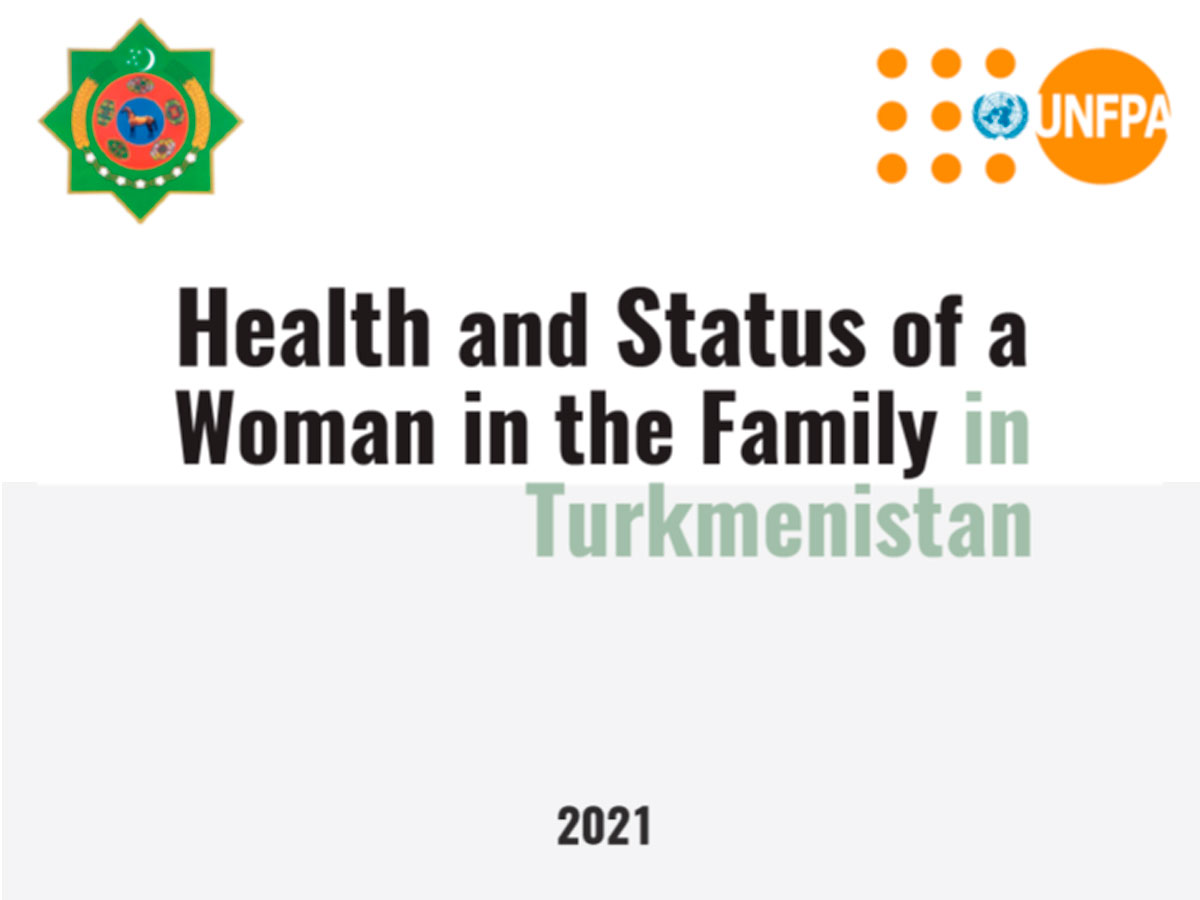 The sample survey "Health and Status of a Woman in the Family in Turkmenistan" (Turkmenportal, UNFPA) is the first national experience in collecting data and analyzing the problem of domestic violence against women based on interviews with women aged 18-59 in all regions of the country (the capital and five velayats). The total sample size is 3596 households.

The survey was carried out with the technical support of the United Nations Population Fund (UNFPA), with funding from the Government of Turkmenistan and support from the international organizations (UNFPA, the European Union and the British Embassy in Turkmenistan). The full report is available in English and Russian and a snapshot of key findings and recommendations is published in Turkmen, English and Russian.

The results of the survey made it possible to establish the presence of domestic violence against women in the country. The government is accepting the problem of domestic violence in Turkmenistan. It is an overdue progress in starting to understand women’s and girls’ status and urgent problems in the country. This report should have come out 32 years ago, when Turkmenistan became independent.

The report creates a language around the problems related to domestic violence and this means that we, as a society, can talk about this constructively instead of denying and hiding it. The survey affirms that, just like in any country, violence in Turkmenistan damages women’s health, violates their basic rights and make them more vulnerable. Domestic violence is both a public health and a human rights issues.

There is no law against domestic violence in Turkmenistan. The report calls for development and adoption of the Law on Domestics Violence.

The report does not mention any existing centers, resources and shelters available to women fleeing domestic violence in Turkmenistan. To Saglyk’s knowledge, there is only one shelter run by Keyik Okara in Ashgabat. No details on how to access it is available publicly. Our requests to share information about the hotline created by UNFPA and the British Embassy as well as our questions about who calls in and what type of support they provide have been responded with silence by both organizations.

The report says that "given the high level of trust in doctors in the Turkmen society, during the consultations it was decided to engage women working in the health sector, in particular family doctors and doctors specializing in reproductive health, as interviewers". We asked around. None of the family doctors and gynecologists we contacted were aware of this survey. Do you know anyone?

It is not clear who and how UNFPA Turkmenistan found and trained doctors to become interviewers at the beginning of COVID-19 in Turkmenistan (February 25 – April 1, 2020). Police and doctors in the country do not have evidence-based protocols for working with victims of domestic violence and due to this and other cultural factors, some of the police and doctors actually justify violence. All this raises a lot of questions concerning the quality and results of the survey. It is also highlighted in the report that "among those who sought medical attention, the majority did not tell the medical staff about the abuse".

2019 MICS data: 58.4% of women aged 15-49 consider violation of restrictions and obligations imposed by spouse’s controlling behaviors as a sufficient reason for husband to beat his wife. The first most common form of control is when a husband does not allow her to leave the house without his permission. The second most common form of control is a ban on working or studying outside the home.

Some of the new statistics:

↪ 12% of women surveyed have been subjected to physical violence and/or sexual violence by a spouse or partner:

▷ 41.1% at least once in their lives encountered one or another type of controlling behavior from their husband/partner (restrictions on leaving the house, access to public space, studying and working);

▷ Among women who experienced husband/partner violence, one in five (21.6%) experienced violence during pregnancy;

▷ 2.4% have been physically abused by someone other than their partner/husband;

▷ Lebap velayat had the highest proportion of women exposed to physical violence by a husband/partner (17.1%) followed by Dashoguz (12.4%).

↪ 83.4% of women currently married/in relationships are unable to sell their property without the permission of their husband or other family members;

↪ Mothers are the second most common source of physical abuse;

↪ The prevalence of physical violence by a husband/partner in urban areas was 10.7%, in rural areas – 12%;

Most women in Turkmenistan who have experienced domestic violence often do not tell anyone about it. Only 36.8 of women said they had told someone about their experience. In most cases, husband/partner violence is not an isolated incident, but a recurring phenomenon. A woman who has experienced violence from her husband/partner once is likely to experience it again.

Children are our future

Survey data reveals that in families where there is physical abuse by husband/partner, children see scenes of beatings. In 25% of such families, children witnessed a beating at least once.

Our analysis and questions:

The report does not mention anything on abuse that mothers-in-law inflict on their gelin (daughter-in-law). This is a longstanding type of abuse justified by harmful tradition of full submission to the will of the mother-in-law as a sign of being a good gelin.

This report contradicts the dominant narratives in the Turkmen society that "Turkmens are not violent", "Turkmens have happy families", "in Turkmenistan we do not have domestic violence because everyone lives according to our ancestor’s traditions" and etc. The report makes one uncomfortable and make you start thinking about the society and the impacts of violence on future generations. According to the survey there is a higher prevalence of severe physical violence than moderate valence in Turkmenistan.

There is a paradox: The report highlights that most of the violence against women happens in the family-by-family members. However, there are no accessible institutions and services in most parts of the country that help women, and on top of that, there is a widespread understanding among the public that if poliсe or any institution tries to weigh in, then the family will be "destroyed" by outside intervention. There is also a cultural practice that problems in the family better stay and get resolved in the family for the sake of protecting the family’s reputation and honor. All these conditions leave most victims with no other choice than to suffer in silence. This is not addressed in the report.

What should I be looking for?

You should be looking for the educational content in Turkmen and Russian on domestic violence that will be coming or not coming out from the Ministry of Health, the State Statistics Committee, the Institute of State, Law and Democracy of Turkmenistan, UNFPA Turkmenistan, the European Union and the British Embassy in Turkmenistan. Will the results of this report be communicated to the public or will it be forgotten on the shelves?

Have you read the report? What is your analysis?